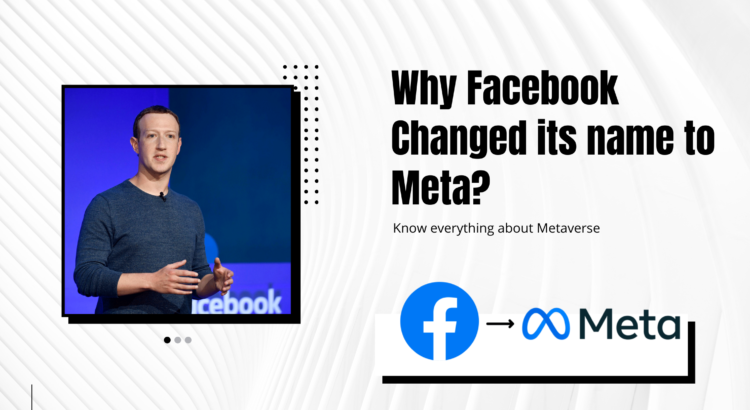 Why Facebook Change its name to Meta? Know Everything about Metaverse

Facebook has changed its name and now it is going to be called as Meta. The CEO of Facebook Mark Zuckerberg had decided to create a new virtual world known as Metaverse. This particular change for will not affect the Facebook or the instagram users.

Mark Zuckerburg the CEO of Facebook announced that now his company would be termed as Meta or Meta platforms. This decision had been put forward by Mark Zukerburg, only to bring all apps and technologies under one new brand. If you are an active Facebook user nothing to worry about, as nothing is going to change for you. Even it is same for Instagram and whatsapp users. The apps and the websites are going to use the old name.

The changing of name to Meta, a lot of questions were asked by the users in its initial stage like – whether the social media app is going to change or not? Well the answer is ‘NO’.  According to the CEO of Facebook, nothing has been altered except the name. Everything is as similar as it was before. The guideline is same as it was before, as no new features and layout has been announced by the official head. There will not be an issue using the other Facebook- owned apps including Whatsapp and Instagram as they do not contain any “Meta” in them.  The CEO of Facebook did not want his company to only be known as a social media company, as he wants to make it a technology company with lots of app in it. Mark Zukerburg in his founder letter announced that the new platform will be a more impressive one and the user can almost do anything they want. He also informed all his users that through this Meta platform people can get together with family and friends, work, learn new things, shop, and create a virtual world.

The Facebook name change news came as a shock for many users, as they were confused with what are the changes they might have to go through. According to the company, Facebook Inc. is now termed as “Meta”. Facebook wants the rebrand to portray how Mark Zukerburg is repositioning, the tech company around the Metaverse, which he thinks is a key area to attract the young people. Mark Zukerburg also revealed his plan of including Crypto and NFT into his new platform, ensuring high quality of privacy and security for the users. According to Mark Zukerburg, renaming the company was a bit difficult, he choose the name “Meta” because of its meaning. In Greek, “Meta” means “beyond”. It also implies “Metaverse”, an online virtual harbor that he wants to build. In initial days, Facebook had problem of everyone calling them “Meta”. Firstly, this Facebook name change news confused all their users, and it was viewed as a step to divert all the attention away from the negativity it was surrounding. Some critics also believed that, Facebook has done it as the name became toxic. It already came into news that the senators did not pay any attention to the name change and termed it as “cosmetic”.  Secondly, “Metaverse” did not exist yet; Mark Zukerburg was keen to stress it, as it was a long term product. So, changing the name totally unrelated to its main domain was a bit strange. Maximum Facebook revenue comes from advertising on Instagram and Facebook. Thirdly, we are well aware that other big tech rebrand have failed in 2015, as hardly anyone refers to as “alphabet”.

It is clear that Mark Zukerburg’s passion is no more on Instagram and Facebook. He wants to create a virtual world, and change human experience. The everyday criticism of how he runs his famous social media company is draining. The restructure will allow the CEO of the Facebook to focus more on the segments that excites him more. We have to wait to check, how people are accepting this new initiative. Apart from using a device, people in a metaverse can use a headset instead, to get inside the virtual world, connecting with all sorts of digital environment. It is believed that the virtual world can be used for almost anything like work, playing games, concerts, to socializing with family and friends across the world. Facebook now claimed that it intends to start trading its share under the brand new stock ticker MVRS from December onwards.

There was news, where an ex-employee of the company Ms. Haugen leaked some vital documents which stated that Facebook withheld important information about vaccine misinformation from the policy makers during the pandemic situation. It was the latest news in series based on the internal documents released by Ms. Haugen to the media. Among other things, the reports have also claimed that Facebook sat on a research and discovered that Instagram harmed a lot of teenager’s mental health, and had to struggle a lot to completely remove hate speech from its platform. Mark Zukerburg had claimed that the report was falsely coordinated effort to selectively used leaked documents to paint a false picture to destroy the company’s reputation.

The main reason of Facebook name change reason was that there were allegations that Facebook valued profit ahead of social harm that it potentially causes in the society, and there were people who supported the alleging flaws of the Facebook and how it functions. Government regulators and officials across the world have also questioned how Facebook works, which is a major drawback for Mark Zuckerburg. Minutes after Facebook name change news came to light; it faced a lot hilarious comments on Twitter, especially from various different companies, people and even the social media giant Twitter. Taking the social media handle, Twitter has mocked the Facebook name change to “Meta”.

The company has hugely invested to expand its business. Mark Zukerburg said the change would bring together different apps and technologies under one brand. Mark Zukerburg also showed a demo of what the Meta verse looks like, while people connecting as avatar, and being transported to digital version of various place and time duration. In addition to its name change to Meta. it also announced an upcoming virtual headset known as Project Cambria, a high end product available to release next year at a high price point. People are slowly adapting to the word named as ‘Meta’. People who are technically challenged metaverse means refers to the digital space, which is more lifelike by the use of virtual reality. Mark Zuckerberg also stated in an interview that metaverse is the future of the company. Zuckerburg described his plans and stated that metaverse will reach billions of people within the next few decades. He also described his futuristic plans of creating the future digital world, where they would feel they are with one another and have a ‘sense of presence’ despite being far away.

This Meta platform would allow all its users to creatively customize its digital spaces, decorating a digital office with varieties of images, videos, and books. The presentation imagined users inviting friends over virtually, like two people from different part of the world attending a concert together, or office colleague creating work presentation remotely. Mark Zuckerburg also changed his company’s sign, which featured the picture of a thumb- up replacing it to a blue infinity sign.